I’ve thought long and hard about the topic for this blog post. I’ve had a great many ideas, all of them surpassing the previous. I could have written about my friend who accidentally brought a scorpion back from her mum’s wedding in South Africa, but the BBC beat me to it. I could have ranked all the Sharknado films in order, but let’s be honest they all tie for first. Or I could write about the fourth estate and journalism in a more theoretical sense, but this idea didn’t include scorpions or sharks so that idea got shot down real quick.

Then the Jonas Brothers got back together and so now I’m obligated to do a follow up on my magnum opus blog post from the first term of this year. If you didn’t already know, I am singlehandedly responsible for reuniting the Jonas Brothers and I defy anyone to prove otherwise. What initially started out as a sleep-deprived conspiracy theory at 3 am looking into the all available information on the band’s ex-bouncer Big Rob, led to something great. I mean it was a click-bait blog post but at least it was a good one.

So, to fill you in on what you should know since I went down my rabbit hole of insanity he’s a quick update. After trying to find out whether Spotify, The Jonas Brothers or Big Rob was behind the disappearance of one of the greatest Pop Rock anthems of all time I momentarily went insane and created a conspiracy theory.

BUT MERE MONTHS AFTER I POSTED IT BURIN’ UP WAS RETURNED TO SPOTIFY AFTER ALMOST A YEAR OF BEING TAKEN DOWN.

I am the Spotify arm of the Fourth estate. I took on a multimillion-pound empire of music and I came out a hero. To quote Rob Bailey:

“This is quite possibly the greatest achievement of modern investigative journalism” (he genuinely said this, and I agree wholeheartedly).

So how does this relate to the Jonas Brothers reuniting? Well, good question and I have an answer to that. It’s simple, Spotify obviously had to talk to the Brother’s and Big Rob to sort out the issue, they came to a mutual arrangement and it was returned to the music streaming platform in all its glory.

While sorting this out it reignited the spark and if you listen in to the subtext of their recent interview during an episode of carpool karaoke with James Corden, you can quite clearly see that ‘documentary’ they were making is about me. 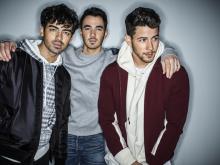 Now is this a conspiracy theory? Yes, of course, it is. I’m a 23-year-old man who still plays Pokémon Go and owns a bat-signal. But I can dream and let’s be honest the newest Jonas Brothers song is quite the bop and I am willing to unduly take credit for its existence because at this point this far into my degree I could really do with a win.

But most importantly it’s a great reoccurring joke that you can experience frequently by listening to Scott and Calum Say stuff. My new podcast with Calum O’Shea, now available on Spotify and all good streaming platforms. Yes, this was basically just another conspiracy clickbait post to lull you into a false sense of security just so I could promote my own podcast. But at least I understood and made use of SEO and the link economy so there’s that.

But don't worry I've included a little sneak peek highlight video of the second episode of the podcast just to prove I actually have made one (surely that's got to get me bonus marks right?). I may not be conventional when it comes to blog posts but at least it keeps you on your toes.
video: