Let's rewind back to the time when I was a sweet 13-year-old - just discovering the wonder that is puberty.

I had a great set of friends, a girlfriend, and a loving family. I was excelling at school, especially at English, despite being the 'quiet' one in class all the time (it was my legacy other than being known as the 'Harry Potter freak'). My life seemed perfect to outsiders. I had no reason to feel down or isolated from others.

Except, there was a deep secret I was hiding from everyone, even my already out and proud LGBTQ+ relatives - I was attracted to males. Should I have embraced myself and came out at that time? Probably yes, but any queer person will tell you it's not as simple as that. It was 2009 and same-sex marriage wasn't even legal in England & Wales yet. I was from a moderately conservative family and living in an extremely conservative area of Kent.

Those were all questions that kept playing in my mind all day, every day. At school, home, or even out and about. The more I thought about it, the more I felt ashamed and dwelled in further self-denial. I remember trying to convince myself that I was really straight and I was just going through a tough time, that's all. That must have been it. I couldn't help but feel like I would disappoint everyone I loved and cared about. Let's not even talk about school - the gay, lesbian, bisexual and transgender people who weren't afraid to express themselves like I was, were ridiculed and bullied to oblivion. Being a closeted gay teenager was hard. It felt like you were locked in a padded room within your mind, and no matter how much you shouted to be free, there was no sign of an escape.

Fast forward to age 18 - I had left school and just started my undergraduate degree in creative writing. I was tired of not being sure who I was so I decided to find out what I liked sexually. I won't go into specifics, but I certainly didn't find the prospect of making out with a woman appealing. However, I still found them attractive. So, I came to the conclusion that I was bisexual.

A year later and I finally admitted to myself that I couldn't go on lying anymore.

I plucked up the courage to tell my girlfriend, parents and a few friends. At first, they were shocked and then the interrogation began.

“How do you know if you’re with a girl?”

“Have you had sex with a man?”

I broke down at university the next day. Then came the tedious repetitive story of how I came out to my parents the previous night to my classmates.

I came out on 30th March 2018 after feeling so low, that I started contemplating hurting myself. I was in a dark place. Looking back on it now, I don’t really know why I felt so afraid and isolated. My mental health struggles were primarily triggered by my sexuality issues, and even though that part of my life has now been closed, it still affects me to this day as I am still taking medication daily. 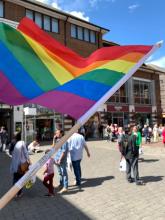 Am I a lot happier for it? By far. I’m in a relationship with the love of my life, doing a journalism degree with some of the best people I’ve come to know. Most importantly, I realised who I was. ‘Coming out of the closet’ was the best decision I’ve ever made.  It helped me grow some thick skin, face the world and be proud of who I am.

Why 'coming out' made me stronger