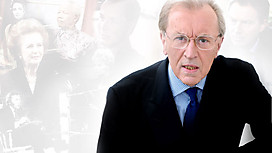 It should be worth tuning in to BBC4 tonight for the first in a short series of documentaries about the television interview. It's presented by David Frost, who looks at the history of this very particular format and talks to some of its great practitioners. It's not clear from the listings which of the four programmes (the next three are on Wednesday, Thursday and Sunday) will deal with the political interview, but expect to see input from current interviewers including Jeremy Paxman and Andrew Neil, as well as clips from some of the classic performances - Robin Day causing John Nott to walk out live on air springs to mind.

Frost himself will no doubt have his own insight, having been responsible for the political interview which still holds the record for the most viewers - his battle with disgraced former president Richard Nixon in the 1970s.

Postgraduate and second year undergraduate students in particular might pick up a few tips as they prepare for their long-form interviews for their online assignments .

I saw this. It is a fantastic analysis of the art of interviewing, with contributions from both practitioners and interviewees and clips from revealing interviews of the past. Find it on BBC iPlayer if you missed it.