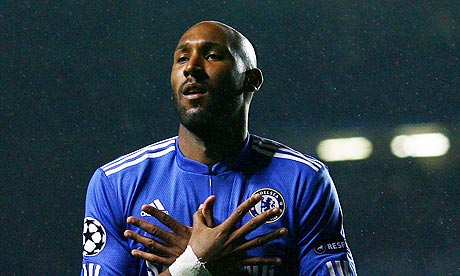 As far as first steps on the road to potential Champions League glory go, this was a fairly uninspiring start for Chelsea.

Carlo Ancelotti will pleased with the three points – which were secured with a strike just after half time from Nicolas Anelka – but he will know that his side can play much better than this. The Italian could counter that at this stage it is points, not performances that matter. And these points were gained without the likes of Didier Drogba, Jose Bosingwa, Joe Cole and Yuri Zhirkov.

On a rain sodden night in West London Frank Lampard was the first player to get an effort on target, forcing Porto’s Helton into making a save.

The Portuguese champions then had two efforts at goal in a frantic opening few minutes. First Hulk let rip with a shot that Cech chose to save with his legs. From the resulting corner Rodriguez, under pressure from Michael Essien, headed over.

With eight minutes on the clock there was a coming together between the captains – John Terry and Bruno Alves – and the England defender needed treatment before being able to continue.

Lampard was getting right into the thick of things, setting up Nicolas Anelka for a shot on goal and having two chances himself, both of which he squandered.

Michael Ballack and Salomon Kalou came as close as any Chelsea player to opening the scoring when they both slid in and just failed to make contact with a teasing Branislav Ivanovic cross.

But as the game began to drift towards half time, the Blues began to concede possession cheaply and Porto could so easily have taken the lead. Gaurin found himself in space but could only head over the bar. His team mate Raul Meireles also found himself unmarked but again he couldn’t get his effort on target.

Then just minutes after the restart Ancelotti’s side took the lead. Kalou was the provider, prodding the ball through to Anelka, who finished nimbly at the second time of asking after his initial shot had been saved by Helton.

Florent Malouda nearly made it two five minutes later, however his header only hit the side netting.

Ivanovic – deputising for Bosingwa at right back then sent in another excellent cross on 58 minutes and Helton had to be at his best to keep out Kalou’s header.

1-0 is always a precarious winning margin, as Chelsea found to their heartbreaking cost against Barcelona last season, and, aided by some slack play from the home side, Porto sensed they could get something from this game.

This translated into shots from Hulk, Guarin, Falcao and Varela as those inside Stamford Bridge nervously waited for the final whistle to go.

There was still time for Fernando to be shown a second yellow card for a late tackle on Ashley Cole.

When the final whistle blew the sense of relief around the stadium was tangible. An improvement will need to be made on this performance, but there is a long way to Madrid yet.

Lacklustre Chelsea do enough to see off Porto