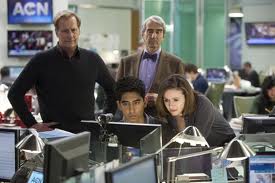 I got the chance to preview the highly anticipated HBO series The Newsroom the other day. Created, produced and scribed by Oscar-winning screenwriter Aaron Sorkin (The West Wing, The Social Network), The Newsroom portrays the behind-the-scenes events in a fictional television newsroom and features an ensemble cast, including Jeff Daniels as news anchor Will McAvoy. It'll be hitting our shores on Sky Atlantic next month.

Without wanting to give away too many spoilers, episode one sees McAvoy returning to work after suffering a breakdown at a televised political debate, only to find most of his news team have deserted him. Cue scenes of studio execs wanting to 'shake things up', ambitious young producers rocking the boat and pretty blonde interns struggling to get taken seriously.

The pilot episode runs for 75 minutes and as you can see, it goes about ticking the boxes of just about every 'journalist in fiction' stereotype.

The first half is a slow-paced assessment of each character, but the second half races by as it shows the news team attempting to react to the Gulf of Mexico oil crisis (it's only then that we're presented with titles that inform us the series is set in 2010, convenient!)

In order for journalism to translate well enough to create a riveting plot, each member of the news team is set to work as though they've suddenly been employed by Jeff Tracey (one for the Thunderbirds fans). *SPOILER ALERT* And of course, every time a researcher wants to get hold of someone to interview, they pick up and are on the air within minutes. If only real journalism was that easy.

McAvoy also manages to ad-lib an entire hours worth of telly due to a lack of script on the autocue. Now I'm no news anchor, but this seems a bit tricky to me. Especially when you hear how succinct and authoritative McAvoy sounds.

It's not your usual journo in fiction mind. Many hacks are presented as scruffy do-gooders uncovering the dirt on pantomime villains. Here we're presented with a newsroom environment, which hasn't really been taken too seriously in recent movies (Morning Glory, Anchorman). When the action kicks off, it's hard to distinguish the chaos of the newsroom here and the chaos of the Counter Terrorist Unit building in 24.

Everyone is in shirt and ties and Dev Patel is where he should be on any acting job, tucked away in the corner so we don't have to wince in awkwardness at how bad his acting is.

It's definitely worth a watch, if only to bask in Sorkin's rat-a-tat dialogue and to see Jeff Daniels on absolutely top form. Thanks to its bigging-up of journalists tackling corporate and commercial obstacles, it makes for good viewing.

But should the profession of journalism be so heavily serialised in the name of ratings? It's a topic that is raised in relation to the plot by Emily Mortimer's character, yet any journalist who has worked in a newsroom will be able to see the distinctions between fact and fiction.

If anyone manages to watch it, let me know what you think.

I really want to watch this

I really want to watch this but alas am only a Freeviewer and don't have the privilege of channels like Sky Atlantic. Do you know if you can watch it online?

Cos its on HBO in America, many of our colonial friends have the same problem as us with Sky so there's no shortage of places to watch it online. As this is a well-respected site I won't plague it with dodgy, copyright-infringing links but a simple search along the lines of 'watch The Newsroom online' will bring up the required results :)