I was going to pick of the day this, but it's a little off the wall...

On Channel 4's increasingly appealing 4oD I came across an awesome (in the literal, awe-filling sense) series called Daredevils.

It's all about, not to put too fine a point on it, crazy people doing the most extreme sport-endurance type things you can imagine. 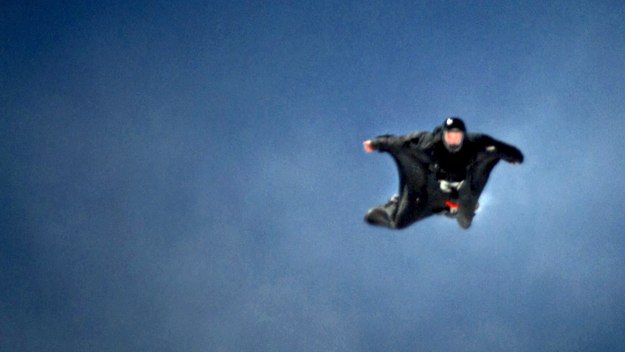 I've only watched those two so far (The Human Spider Returns and The Human Bird), and they're amazing. They've gone to incredible lengths to get shots of these guys doing their thing, and both films follow them over two years to the culmination of one of their goals.

As you might expect, they're pretty strange people. They both reminded me of Phillipe Petit, the protagonist in last year's Man on Wire (below). Curiously, though, they also reminded me of Sean Langan, the documentary film maker who was taken hostage by the Taliban last year. In so far as there is an essential tension at the heart of their character, between the life-risking work they love and their family/home life, the parallels are striking.

Note for Richard: you can now watch Langan's talk on a better player, though the start is still cut off.

The connection you mention between these people's risk-taking and their family life making them interesting characters to film is intriguing. Unfortunately I haven't seen Man on Wire, but I am guessing it doesn't rely quite as much  -- judging from the two short clips I've seen --   on frantic music and VO as Daredevils.

I'm also wondering whether Frontline put Langan's talk on a better site because you told them that the quality of the original Langan talk wasn't ideal. They do value feedback.

Man on Wire's worth a watch

As mind blowing as reading 'man tight-rope walks between twin towers without net or rope' is, it just doesn't compare to seeing it. Truly unique.

I've watched the latest episode with the flying car, and I've gotta say that I'm quite interested in watching the rest of the series. The episode resembled Long Way Down or Long Way Round with Ewan McGregor, in that the two guys were going from England to Timbuktu over a period of a couple of weeks.

As for the VO, I thought that the tone was marginally grave? It was a shock to discover that it was in fact John Simm (Life on Mars, "The Master" in Doctor Who) who had narrated.