Submitted by Chandni Sembhi on 25 March 2019 - 7:27pm
First of all, let's get one thing straight - the tiers AREN'T MY PERSONAL OPINION. Channel 5 surveyed people, and just like with Brexit, the public really fu!$%d up.
Anyway, this story begins earlier than you think. When I first started on Channel 5's social / video team at the beginning of February, one of my first shows to clip was 'Britain's Favourite Crisps' and I saw the show, made the pyramid, and was SO EXCITED for it to be out there in the world. Then due to a scheduling change, it was pulled, and myself and my boss waited eagerly for its return. 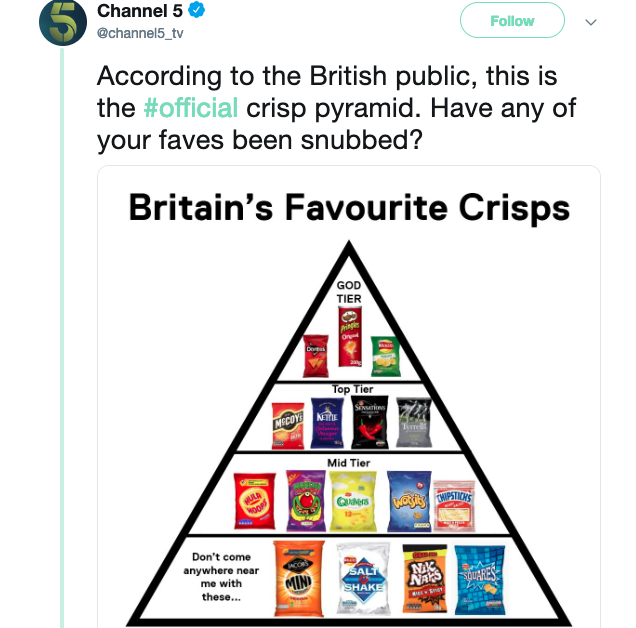 Then, a couple of weeks ago when we found out it would air on Sunday 24th March. We were buzzing. We knew the meme would be a success.
Initially, the buzz was pretty slow. The tweet went up as the show ended at 10pm and nothing ~really happened. Today was a normal say. Or so we thought. At around midday, I noticed on Twitter that some people I follow had RTd the meme, which I thought was fun.
Then about half an hour later, we noticed Pringles was trending.
And then we saw it.
The influx of tweets absolutely RAGING about the pyramid. We knew there would be *a* reaction, we just didn't realise how big it would be - although that's on us for underestimating how much people care about crisps. Now, as someone who really enjoys being an irritating person, this was a dream for me. The public was briefly more torn up about a meme I'd spent 10 minutes on than the impending monumental shit show that is Brexit.

Everyone from the crisp manufacturers to James Cordon to Truck Festival had an opinion. Some people thought Pringles and Mini Cheddars didn't deserve to be called crisps; some were angry about Space Invaders and Pom Bears being left off the list; and others had issues with the flavours (to which I say: are you joking? Did you expect us to rate individual flavours as well as brands?) 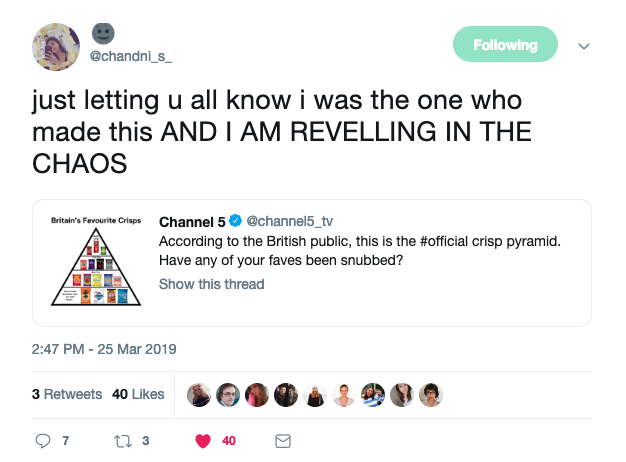 Our engagement rocketed, so we took this as an opportunity to go on Crowd Tangle (a very useful analytics tool) and see how we were doing compared to other leading broadcasters on Twitter, and needless today, WE SNAPT.

I've fully accepted that I've peaked at age 22 with this Tweet, and I am so proud. It's created very valuable, meaningful, and intelligent conversation that this country has been lacking for a long while. It's brought together people of all ages, races, and genders. It may have torn apart families, but the engagement more than makes up for it.

Firstly, there the fuck are the Skips?! Secondly, if you think Original Pringles are good you belong solely in the bin. Thirdly, have they never even heard of spicy tomato wheat crunchies?! Everything about this is wrong. https://t.co/tUemFZ6tem

The moral of the story is, you can put anything in any ranking and people are going to be annoyed, but it'll do absolute bits for your engagement and people at work will think you're a social media genius. Also, make sure you vote, and don't vote for something bad 'as a joke'.

Chandni, that is brilliant

Thanks very much for sharing. You caused a real problem in Northern Ireland: good on you.

The Tayto Cheese and Onion ones are like a local cult:

A lot of the locals can do blind taste tests and get them right every time.

There's even great disquiet that Brexit is going to disrupt supplies. People are stockpiling: