I finished listening to the new Billie Eilish LP a few days ago: "WHEN WE ALL FALL ASLEEP, WHERE DO WE GO?", and I've got to say, it's probably an early ballot in contention for album of the year. The lo-fi, intimately mixed vocals heavenly bled into stripped back, lushious, instrumentation, bringing elements like percussion and bass, which one would usually take for granted, to the forefront, almost redefining why certain sounds are implemented. It's mind-altering, it's lyrically thoughtful, it's fantastic, I like it a lot. 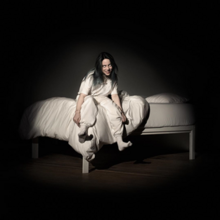 But all of it seemed so sudden. How did this 17-year-old girl from Los Angeles come out of essentially nowhere? And even more-so, with high-fashion, expensive outfits, a seemingly already established image and aesthetic. Not to mention her elements of mid-noughties goth culture and general teenage edginess and angst, which given the current musical zeigeist and tone, is incredibly in and VERY marketable, as well as having a soft, angellic voice that you'd probably find in the background of some lo-fi hip-hop YouTube radio channel that streams for 24 hours. All of these things come together in a way that's perfect. Too perfect, almost. Like she's been assembled. After some digging, I came to the conclusion.

I mean, obviously, despite her taste for green oversized pullovers, she's not a plant. She's clearly a human. But what I mean is she's what's referred to in the music business as an "industry plant". This term is as face value as it gets, meaning the artist was planted by the industry as a way to capitalise on what is popular among contemporary music listeners. And these plants have been around for decades and decades now. Travis Scott has been outed as Kanye West lite since he signed to 'Ye's "G.O.O.D Music" imprint in 2013 with little-to-no body of work under his belt. Rapper Logic signed a huge record deal right around the time of his appearance on the XXL Freshman List, a huge bit of exposure for him right around the time his debut mixtape was released. Hell, if you want to dig even deeper, Engelbert Humperdinck was quite literally a laboratory put-together mix of Elvis Presley and Frank Sinatra, and it worked.

But how do we find out if someone IS actually a plant or not? Well, I did some digging and I found a few ways to be able to spot whether your favourite artist/band/musician/clarinet player is an organic artist or not.

If an artist is blowing up out of absolutely nowhere with very little material to their name, then sometimes, it's just too good to be true. An example I look at is an artist who goes by the alias of "Jumex".

This gentleman has 2 songs to his name on his Soundcloud, a very popular way for artists to hit it big in this day and age. He has 22,000 followers, however both songs, and his ONLY songs, might I add, have both 3.7 million and 2.3 million plays, which is albeit impressive, but a little fishy. Especially considering the tracks only have 18,000 and and 27,000 likes. The play-to-like ratio just doesn't add up at all, which might, might just be, a result of playbotting or viewbotting for video services. It's also worthy to note the high production value of the music video that is linked above. Any artist who is just starting out and only has 2 songs to their name isn't born with infinite money and resources, which leads to the second hint to find if someone is a plant.

2. Contacts and who you know

Going back to our buddy Jumex again, you'll notice if you see the title of the video for his 'song' "TRAPPED", it is directed by "Taco". Now believe it or not, this isn't as exciting as you or I want it to be and Taco actually exists. He is most notably remembered by most people as a member of West-Coast rap affiliate: Odd Fut, who I used to love when they were popular and active as a group in the early 2010s. But since then, Taco has actually carved out a career post O.F. as a videographer, directing videos for long-time collaborator Tyler, the Creator, among others. Again, you really think someone with that high-a-profile is just going to collaborate with this random kid with 1 other song to his name? Of course not. Someone in the industry had to have known someone else, very much a "guy who knows a guy" sort of thing that can deal with taking money from artists who are willing to pay their way to the top, and subsequently give money to people in the industry with name-power to set said artists up with a career.

This makes the point about Billie Eilish's come-up in music more interesting. Her brother Finneas O'Connell starred as Alistair in Glee, as well as having a recurring role on ABC's Modern Family. Surely Billie just managed to get into the club because someone else in the industry put her on the guest-list, right? How can anyone support that when there are artists struggling to get their names out who have worked on their craft for years?