West Ham United look poised to gain european qualification this season, just 12 months after just securing premier league safety in just the final games of the season. West Ham currently have 19 points more than they had at the end of last season with 3 massive games still yet to be played. David Moyes and staff have come in and made a magnificent improvement to the Hammers with two new acquisitions being key to the success. In 2020 West Ham signed two Czech Republic players from Slavia Prague; Tomas Soucek and Vladimir Coufal. 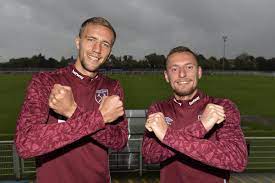 David Moyes’ first signing since becoming West Ham’s manager  was centre midfielder Tomas Soucek who signed on loan on the 29th January 2020 who was then signed permanently in the summer for a fee of £14.58 million in late July. Just a few months later West Ham would then make another Czech addition to the squad with right full back Vladimir Coufal signing for just £5.4 million on October 2nd 2020. The Czech lads have been pivotal to the recent success for the East Londoners.

Tomas Soucek in the 2020/2021 season has missed just one minute of the total games in the Premier League, also scoring 9 goals from the defensive midfield position. He is currently West Ham United’s joint top goalscorer and has participated in 18% of West Ham’s total goal tally. His aerial threat is a major boost for West Ham and has given the Hammers another dimension when they attack. The midfield duo of Tomas Soucek and Declan Rice is up there with the very best in the Premier League.

Vladimir Coufal has not missed a single minute in England's top flight since signing for the club and has the second highest amount of assists for West Ham this season in the Premier League, with 6 assists. Coufal has been one of the bargains of the transfer window at just £5.4 million and looks set to be West Ham’s starting right back for years to come, hopefully replicating former West Ham hard man and ex Czech international Tomas Repka in becoming an all time favourite.

There are only two players who average two or more tackles per game for the Hammers, with Coufal and Soucek leading the way. They have added steel to the way West Ham play and have both become cult heroes at West Ham for their 100% effort and the way they get stuck in to tackles. Vladimir Coufal is 15th in the Premier League for tackles made having made 72 tackles this season. Tomas Soucek is just behind being 19th making 69 tackles which is still very impressive.

The two signings have completely helped transform West Ham with their die hard attitude and relentless running. David Moyes, West Ham manager recently said on the West Ham official website: “Tomas and Vladimir Coufal have brought something else to the club: complete humility. They’re happy to be here, driving it on.”

Moyes also told the Evening Standard: “It’s difficult to keep Tomas and his Czech team-mate Vladimir Coufal away from the training ground, such is their appetite to keep improving- and that is the type of character I am seeking.”

6ft 4 Soucek has made such an impression in football that there has been interest from German giants Bayern Munich and Manchester United over a potential transfer move. The Hammers will be desperate to keep hold of the Czech international however considering the success they have had in the 18 months that Soucek has been in East London for. Fortunately for West Ham fans Tomas Soucek himself is “going nowhere” and is “very happy” according to Stuart Pearce, West Ham first team coach

According to various reports Soucek actually was the man who recommended the club to sign his former team mate Coufal, and it looks like the Hammers haven’t stopped looking in Czech Republic for talent as they have been heavily linked with Sparta Prague and Czech international wonderkid Adam Hlozek and Senegalese Slavia Prague forward Abdallah Sima who has played with both .

Eighteen year old striker, Adam Hlozek looks very promising and has grabbed 10 goals and eight assists in just 16 games in the top league in Czech Republic. Abdullah Sima, aged nineteen has scored 11 goals and registered with three assists in 19 games the Czech first league also featuring in 11 games in the Europa League playing the likes of Leicester and Arsenal scoring four goals in the competition. Whether West Ham attempt to lure one of these prospects during the summer window remains to be seen but with Soucek and Coufal being at West Ham, East London looks an attractive place for any player related to Czech Republic.

The Czech Republic national team are set to play against England in the Euro 2020 group stages on the 22nd of June at 8pm which takes place this summer, with West Ham star and England regular Declan Rice playing against his midfield partner Tomas Soucek and team mate Vladimir Coufal. Perhaps a few players will catch David Moyes’ eye and make the move over to the London Stadium come the start of next season.