“Ring me if anyone bothers you”

“Have you got your keys and rape alarm?”

“Please go while it’s light, I don’t want you out when it’s dark”

All phrases my boyfriend has to say to me before I leave the house.

“I only had one person come up to me today”

“I don’t get why it keeps happening, I look like shit today”

All phrases I say after getting in from a walk on my own.

Many women, including myself, are experiencing harassment every single day when leaving the house. The fact I was having to do all my walking early before it got too dark speaks volumes. I was counting down the weeks until ‘Daylight Savings Day’ because I knew from then forward I could go out later in the day without the fear someone might attack me with no-one else there to see it happen.

I’ll be honest, throughout my life, even when I was visibly underage (wearing school uniform), I’ve been bothered by men on the street. Right now it’s probably the worst it’s ever been for me personally- I don’t know if people are going mad having been in lockdown for a year or it’s just because I’m living in Gillingham (probably the latter) but it’s not acceptable.

I sometimes leave the house wearing all my boyfriend’s clothes cause they’re baggy and cover me up, hence there’s less chance I will be whistled at or stared at. There’s nothing more uncomfortable than being cat-called or basically begged for your number. It’s not flattering and it's not funny.

I am always polite too, even when someone slows their car right down just to ask for my number, or approaches me with their mates. Then when they're politely turned down they get nasty.

“You’re not even that fit anyway”, “Come on don’t be a bitch”, “Oh come on… who cares you have a boyfriend”

Women take many procedures trying to avoid this daily. We take more open routes home, ring our partners, carry our keys as weapons, share our location with friends… yet it still happens too often. Women are kidnapped daily, murdered all the time, even sexually assaulted. This needs to stop.

When you think of the devastating case of Sarah Everard, who took every precaution you can think of… and she still got murdered, something needs to change. Sarah was murdered by someone we are supposed to trust, someone who is supposed to look after us and stop this sort of thing from happening. The police.

The fact that #NotAllMen was trending days after Sarah Everard’s body was found is disgusting. We need men to stand by us and support us… to make us feel safe on the streets instead of trying to hide what’s really happening. Instead of defending the perpetrators.

No one is saying it’s ALL men… but we don’t know WHICH men, so when we’re walking alone at night, we’re sceptical of them all. Do you see the problem? Yes, it’s not all men, but it’s all women. I don’t know one woman who hasn’t been at least catcalled, or begged for a number, or even groped in a club for example. It’s disgusting and needs to stop.

Then when there is a vigil in memory of Sarah Everard, in attempts to put a stop to this and raise awareness, attenders (mostly women) are attacked by the police. They’re pushed to the floor, arrested, shouted at. It was a peaceful protest. They were there to pay their respects and make a stand.

In contrast, there was a group of football fans being rowdy and not obeying COVID-19 rules on the streets who were allowed to continue.

Here’s images for comparison; the football fans were drinking, letting off flares, shouting football chants all while most of them weren’t wearing masks. 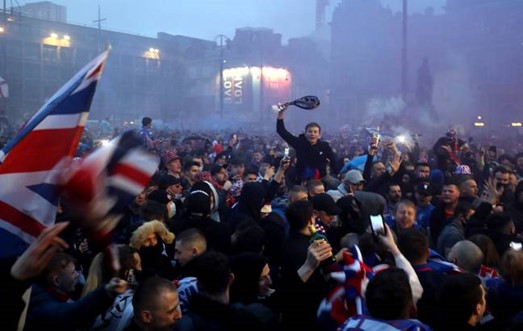 The women were (pretty much) all wearing masks, stood peacefully, holding some signs, defending their freedom and protesting. Here’s what happened to them. The police turned it violent. 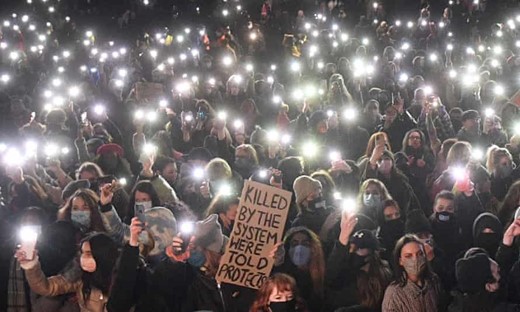 The women were paying their respects to Sarah Everard, an innocent woman who was murdered, and were forced to stop… the football fans were being rowdy and loud and were allowed to continue. How is this fair?

Why is the blame so often placed on the victim?

Behaviour needs to be taught in schools from a young age. Rather than teaching girls they shouldn’t have a short skirt at school, they should teach the boys how to respect and treat women regardless of what they're wearing. If children aren’t taught basic respect from a young age they won’t grow up knowing what’s acceptable. Too often people look at the victim and try to find ways to blame them. Schools need lessons on consent, behaviour and how to make women feel safe.

We need men to show us they are our allies and that we can trust them. We need men to take a stand with us rather than tweeting #NotAllMen.

“Men are afraid women will laugh at them. Women are scared men will kill them”. -Mary Attwood.

This really demonstrates the severity of the situation. As a society we need to look at why women are so terrified of being assaulted or murdered and think of how to make women feel safer.

I don’t know one woman that hasn’t been catcalled and the amount I know that have been groped or sexually coerced is disgusting. It’s sexual assault. It’s rape.

How can you help as men?

Stop laughing when your friends make derogatory comments about women, have conversations with women about how you can help/make them feel safer (ask your sister, your mum, your friends). At night time cross the road so you’re not seeming to be approaching the woman. Trust me, this helps so much.

You don’t realise how scary it can be feeling a presence behind you, sometimes even speeding up, and having to clutch your keys or grab your rape alarm in preparation. Your heart starts beating faster, your throat closes up. Then he just walks past you… oh, nothing to worry about. But it doesn’t stop us from feeling that way the next time someone approaches, and the time after that. Even worse when it’s a whole group of men.

It’s so important to realise how serious this situation is. Women are sexually assaulted, harassed and even murdered every single day. The fact we have to clutch our keys in our hands just incase we get attacked, or we can’t listen to music if we’re walking alone because we have to be aware, is not okay.

ScoopWhoop conducted a survey, asking women: ‘What would you do if there were no men for 24 hours’?. Here are some of the answers:

“Take a solo trip without the fear of being kidnapped”

These answers are just shocking, and so much of the time women will be told we are overreacting or we’re being too sensitive. We aren’t overreacting. It happens every day. It probably happens to your mum, your sister, your colleague.

A recent YouGov poll for UN Women found that seven out of 10 women had experienced some form of sexual harassment in public.

This number was nearly nine out of 10 for younger women.

This needs to stop. People need to stop victim blaming women and actually help us to feel safer. We need lessons in schools about behaviour and consent from a young age. Men need to actually ask women what they can do to help, rather than assuming. As women we shouldn’t fear for our lives everytime we leave the house.

It's #NotAllMen but we don't know which men.