How often do you see people writing in their social media profile bio: ‘citizen of the world‘? I do see a lot and probably some of us would prefer to have a World Passport at the cosmoplitan age, which was founded by Garry Davis back in 1954. You can get it even nowadays for only $45, but as long as it is just a fantasy travel document, we need to identify ourselves. But how can you identify yourself if you do not feel being citizen of any country? What if there is no country you can call ‘home‘?

As an international student in the UK I often receive quite common and simple question: “where are you from“? For the first few times this question made me stuck for a while, but I usually say that I am from Lithuania. Aftewards, I see quite thoughtful face expression of the person I am speaking to and get some typical questions, such as: ‘Sorry, but where is it?‘, ‘Is that the part of Russia? ‘, ‘What language do you speak in your country?‘

It takes a while to explain that people in Lithuania speak Lithuanian, but my mother tongue is Russian, as it all comes from history and the Soviet Union times, which probably sounds a bit confusing for western Europeans.

However, identifying myself causes even more confusion. I grew up with Russian mentality, traditions and religion, but at the same time I cannot call myself Russian, as I have been to Russia only once and I am not a citizen of that country. It would be strange to call myself Lithuanian as well, because Lithuanian is not even my native language. So who am I then and where is my ‘home’?

The diversity of nationalities made me multicultural and this is something that I love about the 21st century. Travel became easier and more accessible. This huge, beautiful world became open for people seeking to explore it, expand their horizons, change their place of living, change their lives. This is what I call ‘global citizenship’.

However, recent survey conducted by GlobeScan and the BBC World Service showed that 47 percent of Britons said that they considered themselves more as global citizens than citizens of the United Kingdom.

The results of the survey are not surprising, they are probably related to all of the global issues that the world is facing at the moment. Three terrorist attacks in just three weeks! London, St.Petersburg and now Stockholm. Isn't that too much? And then you start feeling global, you start to realise that terrorism doesn't have nationality, people become unite, they send words of love and support from all over the world, they pray for each other, they become global.

There are many of us, so-called ‘citizens of the world’ and nowadays passport doesn’t always identify your nationality and reflects your inner feelings. But is it really wrong to feel this way? Bulding my identity from several nationalities made me ‘third culture kid', but it doesn’t mean I am rootless. It means I am global, as many others. What if there is no country you can call ‘home’? But are you sure you need to have one? I don’t think so. Home is where your heart is. Home is where your soul finds peace and harmony. 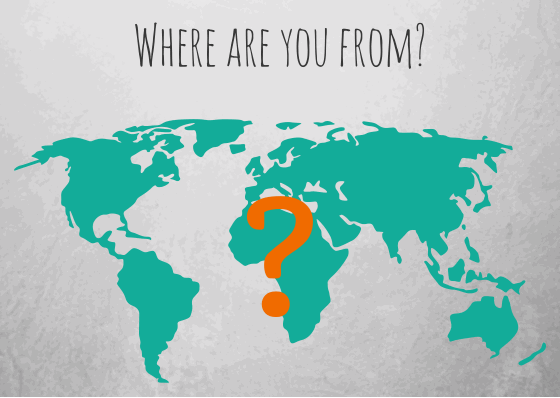